What Is Liquid Kratom?

Essentially, liquid kratom is a concentrated version of the plant. In other words, a process is used to extract mitragyna, the main alkaloid found in the herb, in order to create a liquid version. There are a variety of different strengths when it comes to liquid kratom, which is dependent on the number of leaves or amount of powder used to make it.

The Appeal of Liquid Kratom

There are many different forms when it comes to kratom. Consumers can pick from a variety of products including different variations of powder form and capsules, as well as liquid kratom. Speaking of the latter, you may have noticed that there are more and more options emerging in the market when it comes to liquid kratom. It has become a highly popular way that is said to help in many different ways, from providing energy to helping with relaxation and pain relief. So what exactly is liquid kratom, and why is it suddenly garnering so much attention? We’re going to break it down for you so that you’ll have the knowledge you need in order to decide if it’s a desirable option for your personal needs.

Perhaps the most appealing attributes of liquid kratom is how convenient it is, while also being easier on the stomach than powder varieties.

As far as convenience goes, you can simply take a “kratom shot” to start your day, or even bring it on the go for boosts when and where you might need it. As most kratom consumers know, it can be a real pain to transport powder. Even worse? Trying to “toss and wash” while traveling. Powder could be flying everywhere, and nobody wants or likes a mess…to that we say hello liquid kratom!

Some kratom consumers say kratom powder has an ill effect on their stomachs, and it’s important for anyone taking it this way to make sure to hydrate. If nausea or vomiting occurs, it’s typically due to taking too much. In that case, a lower dose should solve the problem. However, if it causes overall digestive upset, it is wise to take after having a snack or meal. Milk and cheese are known to be great stomach coaters for this purpose as well.

With liquid kratom, you shouldn’t have digestive issues. Of course everyone’s system is different, and if you have a sensitive stomach it is still possible, but unlikely. Also worth noting is that the strength of liquid kratom is higher than powder or capsules. With Top Extract’s 15 ml bottles, you’ll be getting two servings. Each serving is equal to about four grams of kratom. To put this into perspective, a typical dose of kratom powder is equivalent to about five grams, give or take depending on your needs. Generally speaking, kratom consumers say less is better for energy levels, while more helps with such things as pain or relaxation.

Best of all, liquid kratom masks kratom’s bitter taste! While it may cost a bit more, the stomach and convenience benefits outweigh this for many. Overall a win-win.

What are the Benefits of Liquid Kratom?

Liquid kratom is appealing to a wide variety of people because, simply stated, it is said to have a wide array of benefits. People from all walks of life find the herb in liquid form to aid in several different ways, including the following:

Just as with powdered or capsule forms of kratom, liquid kratom is also highly popular for its energy properties. With any kind of kratom, a less is more approach, in terms of dosing for energy, is always best. Start with the smallest amount possible, as you can always increase your dosage if you don’t get the desired effect after about a half hour or so (an empty stomach will usually take less time and vice versa). 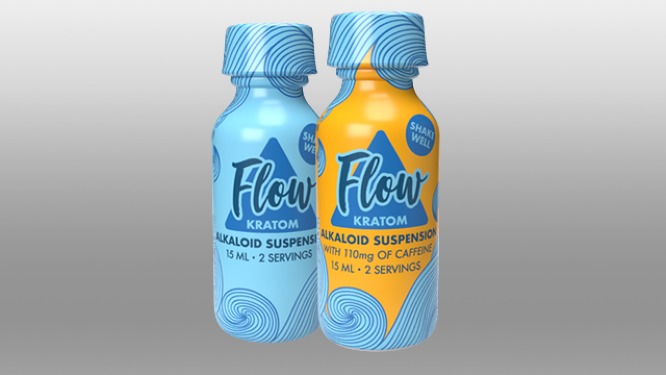 Top Extracts has two different liquid kratom options available, one being caffeinated while the other isn’t. As you can probably guess, if you’re looking to fuel your day, the caffeinated version is probably your best bet. For those who don’t tolerate or are sensitive to caffeine, you can still reap the benefits with the non-caffeinated version. Either way, you’ll still want to start with as small of a dose as possible, and increase slowly depending on your individual needs. While each bottle has two servings, some may find that they’re able to stretch it out even more from there.

A common reason consumers swear by kratom is because they say it helps lift their mood, while also helping with depression. It is said that the alkaloids found in kratom, Mitragynine and 7-hydroxymitragynine, help to aid with mood enhancement, which in turn can also aid with nervousness.

It’s important to note, however, that you should always consult with a doctor if you’re having suicidal ideals or thoughts, or feelings related to depression.

Another popular reason that kratom consumers swear by the herb for is as a natural aid for body tension and aches and pains. This is once again believed to be due to the alkaloids present in the plant. While the alkaloids in kratom hit the same receptors in the brain as opioids, thankfully it doesn’t come with the unwanted side effects of taking harsh or strong medications. It’s also important to note that nobody has ever died from kratom alone. Although mainstream media reports have reported the opposite, every single autopsy to date has had other components involved, including (but not limited to) dangerous drugs such as methamphetamine and heroin.

Liquid kratom is known to help with minor aches, just as it’s powder and capsule form counterparts. However, you’ll have the benefit of easier dosing (about four grams per serving), and all of the other highlights mentioned above.

The non-caffeinated liquid kratom version is probably best to try for tension. However, for menstrual cramps or headaches, you may want to check out the caffeinated option. Many premenstrual syndrome and headache medications also contain caffeine. Again, individual results may vary.

Feeling stressed and/or restless? You’re not alone! Luckily there are natural options that are available to help with both, kratom being a popular option.

With liquid kratom, you’ll want to try a non-caffeinated version to relax and be stress free. Caffeine can cause restlessness and irritability, especially if you’re already feeling wiped out, mentally or physically speaking.

Can Aid With Diarrhea

An extremely interesting anecdotal benefit that kratom is touted for is as an anti-diarrheal agent. It’s thought that the two main alkaloids present in the herb can help to regulate bowel movements for some. Whether you’re having a bout of diarrhea or suffer from diseases such as Crohn’s disease or Irritable Bowel Syndrome, some believe kratom is worth a shot.

A reddit user said that the herb has helped him with ulcerative colitis, which causes diarrhea. “I’ve been using kratom ever since as an anti-diarrhoeal [sic] medicine to help me be able to do a full day’s work, and not spend the whole day in the bathroom,” wrote @dudegreg.

If you suffer from nausea, even thinking about the toss and wash method probably makes you queasy. Liquid kratom could be a great way to still take in the plant’s benefits, as many proponents of the herb say it has helped them with.

Another bonus of choosing liquid kratom over other forms is the ease of dosing. It can be tough to know how much powder you need, or how many capsules to take. While an average dose is about eight grams, this can vary from person to person. Top Extracts labels their products so you’ll know what the suggested serving size is.

Each bottle of Top Extracts’ “Flow” contains two servings, with each serving containing 98 milligrams of mitragyna. This makes it easy to figure out how much you may want to drink, but always remember to start small!

In conclusion, whether you’re on the go or simply want an easier way to enjoy kratom’s natural benefits, liquid kratom could be your best bet, or new go-to.  At Top Extracts, our goal is always to satisfy our customers. We encourage and look forward to your feedback and experiences!

***These statements have not been evaluated by the Food and Drug Administration (FDA). This product is not intended to diagnose, treat, cure or prevent any disease.

Due to weather both USPS and FEDEX are running up to 5 days behind depending upon your zone. Please provide a claim number from USPS or FEDEX if you are looking to replace your order. Dismiss