Rhodiola rosea is an ancient herb which has shown promising benefits for modern times. Such a huge portion of the population these days is stressed out, anxious, fatigued, downtrodden, and so forth; and an adaptogenic herb like Rhodiola rosea root can work wonders in helping the stressed out human body come back towards a state of balance and wellness. In this article we’ll explore some of the amazing specific benefits of Rhodiola that have been demonstrated throughout centuries of traditional usage and modern-day research, and we’ll explain how you can use it in adding it to your health and wellness regimen.

Sometimes referred to as Rose Root, Arctic Root, or Golden Root, Rhodiola rosea has a long history of traditional usage as an herbal medicine where it grows indigenously, in arctic regions of Europe, Asia, and North America. It grows specifically in high altitude mountainous regions on these continents – indeed it is amongst the hardiest of plants, Rhodiola exhibits incredible adaptability to environmental stressors such as wind, cold, and snow. Truly, it thrives in some of the most extreme environments on Earth.

As an ‘adaptogen’ — or a substance which assists the body and mind in adapting to stressors of all kinds, and generally exerts a normalizing effect upon numerous bodily processes — Rhodiola can pass along these adaptive attributes to those who ingest it.

This powerhouse of an herb has been used in traditional medicinal systems of Tibet, Mongolia, Russia, and the Scandinavian countries for many centuries, and has its earliest recorded mention in 77 AD when a Greek physician acknowledged using Rhodiola in an ancient medical publication. It has been used for countless ailments in the aforementioned  countries and more; including for fatigue, depression, anemia, impotence, viral infections, gastrointestinal distress, nervous system disorders, for fertility, and as a general aid to promote physical endurance, longevity, and work productivity.

Let’s take a look at some of the prime benefits people are using Rhodiola for today as an herbal supplement in their wellness arsenal:

As a quintessential adaptogen, indeed much research suggests that Rhodiola root may enhance overall adaptability and support healthy stress levels. Rhodiola does this, at least in-part, by decreasing the cortisol response to stress – which can be helpful to many people nowadays, as dysregulation of cortisol – one of the body’s primary stress hormones — is a pretty prominent problem in the modern age, with chronic stress being commonplace. Rhodiola experientially seems to calm one down, and relieve the feeling of being stressed, while still promoting and maintaining mental and physical alertness.

According to research, on the whole, consumption of Rhodiola imparts adaptive attributes such as protection from oxidative damage during fatigue, protection of brain cells, and protection against oxygen deprivation. Hence, this would make sense why people would use this herb on high altitude hikes to improve oxygenation.

Russian Olympic athletes and cosmonauts first popularized its use as an endurance enhancer and fatigue reducer, which is still a prevalent use today.  Rhodiola is used as well to support motivation and drive, and it does this without the overtly and strongly central nervous system stimulating effect that many other popular herbal tools for this purpose imbibe. In fact, Rhodiola supports energy levels and subjective motivation all while nourishing and supporting the adrenal glands — rather than taxing or depleting them, like common stimulants such as caffeine can potentially do.

Rhodiola shows an anti-fatigue effect which supports its traditional usage in supporting physical and mental endurance, as one review of the science concluded that there is quite a bit of traditional and pharmacological evidence of efficacy in reducing fatigue.

There are even anabolic (muscle-building) properties attributed to this plant, thus it has become popular in pre-workout supplement powders and encapsulated stacks.

The anti-depressive properties of Rhodiola are well documented. There has been extensive research around the world on its ability to support mood and lessen feelings of depression. What’s even more promising is that there are little to no side effects reported in the clinical research that’s been recorded – of course very much unlike the vast majority of pharmaceutical trials. Antidepressant-like and anxiolytic-like effects of Rhodiola rosea have been demonstrated both in mice studies, and in human research.

Rhodiola works in a somewhat different way than the usual suspects of the herbal mood boost world (ie. St. John’s Wort, Kanna). Rhodiola exhibits an antidepressant-like effect by way of modulating the degradation of dopamine, along with norepinephrine and serotonin supportive properties. As well, Rhodiola Rosea can enhance the permeability of the blood-brain barrier, allowing for better transport of dopamine and serotonin – which improves energy, and promotes overall emotional and mental health. Another study of one of the active compounds in Rhodiola, confirmed the antidepressant effect, and theorized it could be primarily based on its up-regulation of the monoaminergic system (neurotransmitters) and an anti-inflammatory effect.

And by essentially calming the HPA axis of the endocrine system, it may further exert its anti-depressive (and adaptogenic) effect. 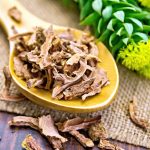 Traditionally, Rhodiola rosea root was primarily brewed into a tea, however today it can be ingested in a variety of ways, including in capsules for ease of consumption.  There are other methods, including tinctures, and powdered mixes, but for the purposes of precision as far as potency and specific dosages are concerned, Rhodiola Rosea capsules would be considered as optimal. Rhodiola’s colloquial name of “Rose Root” was given in part because fresh Rhodiola smells and tastes quite reminiscent of rose – thus, the smell can be a great indicator of freshness and quality.

Certainly, Rhodiola rosea can be incorporated into a holistic lifestyle for the purpose of regulating that ubiquitous pest that nearly all of us face in some form or another today: stress. In fact, it’s one of the fundamental and effective herbs available today for this exact objective.