If you’ve just discovered the herb kratom, chances are you may be a little confused or overwhelmed as to which strain may best suit your individual needs. This is completely normal, as there are several different types of kratom plants. It’s important that you find the right strain(s), which can take a bit of trial and error, but we’re here to tell you that it doesn’t need to be overly-complicated and we can help guide you to the perfect kratom selection.

Once you get the basics down, you will have a better understanding of what the best choices are for your situation. In this guide we’ll walk you through “Kratom 101” where you will learn everything you need to know in order to feel confident enough to make the appropriate purchase.

Below you will find further information about the plant, legality issues surrounding it, and a chart that will help you determine what’s best for your unique situation. Let’s start with the basics:

Kratom is an herb hailing primarily from Southeast Asia, and is closely related in chemical makeup to the coffee plant. Alkaloids in kratom are said to provide pain relief, a sense of well-being, and other benefits for those who consume the plant. The best part? Advocates say it is not any harder to come off of kratom than it is coffee. People have fought hard to keep the herb legal – and for great reason – as droves of people claim it has helped them to combat pharmaceutical and other chemical addictions – safely.  The majority of claims made by consumers is not science based and not supported through proper FDA evaluations.

Traditionally speaking, kratom is known to provide consumers with energy and focus when taking low doses, while higher doses are said to bring a sense of calm. It has been used for centuries, although it only made its way into the United States in recent years. At the time of publication, approximately 15 million Americans are thought to be benefiting from the herb’s special properties.

WHY IS ITS LEGALITY EVEN A QUESTION IN SOME STATES?

Contrary to how some news outlets have described kratom, it’s in fact a plant, and not a synthetic product. But is Kratom legal?

The legality of kratom has left many who benefit from its qualities up in arms – and for good reason. Advocates say they have been able to quite literally turn their lives around using the herb, with conditions that range anywhere from mild pain to mental health issues. Not only do people say that it helps with their pain (while keeping them from taking copious amounts of chemical-laden prescription medications), but they also insist that it has changed their way of thinking. For droves of people, the uplift and sense of well-being that kratom brings, without being high, is the main reason why they won’t give up on the fight to keep the herb legal. Which leads us to the question – why is the government interfering in some states?

According to Jim Sourek, founder of Top Extracts, the issue has less to do with the herb’s healing properties, and a whole lot more to do with when kratom gained popularity.

“It was really a timing issue,” Sourek stated. He continued:

Kratom became popular in the United States right around the same time synthetic drugs came to the market, and turned people into zombies across the nation. Kratom happened to sit right alongside those synthetic products in gas stations with gimmick marketing that lead lawmakers to believe that the plant itself was also synthetic itself. This couldn’t be further from the truth, and it’s a shame that kratom always gets bad press.

It’s NOT synthetic and the legal action against it has been overturned in several states. I truly believe that Kratom will become legal again everywhere once lawmakers become more aware of the product, in fact, it’s only illegal in 7 states according to the American Kratom Association. And things like the Kratom Consumer Protection Act are legitimizing kratom.

WHY ARE KRATOM TERMS SO CONFUSING? Pssst…IT’S EASIER TO UNDERSTAND THAN YOU THINK!

There are several different terms being attributed to kratom, making some overwhelmed when trying to learn the plethora of unique varieties. However, the answer as to why there are so many is pretty simple. Let’s lay it out so you can easily understand the names attributed to the plant, and why they’re used.

Most vendors refer to kratom by different names depending on the strain’s variables, which include:

Just as we all have different palettes when tasting food, our bodies also consist of different chemical makeups. Because of this, each individual will differ in what strain of kratom works best for their needs. For example, Red MD may work best for someone suffering from pain or mood issue, while others may find that yellow or white strains align better with their body’s chemistry.

One rule to keep in mind while going through the kratom selection process is that while there are a lot of different names for Kratom strains, the majority of them are just marketing tactics to push the consumer into purchasing more.  When you find a strain that works for you and the supplier is consistent you shouldn’t have to switch. 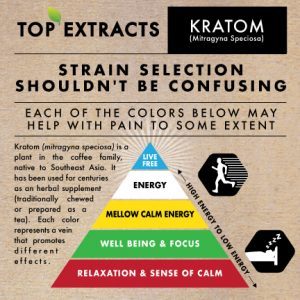 If you’re beginning your kratom journey, take a look at the pyramid to the left to help give you a better understanding of what each strain can provide. Keep in mind this is based on what most people say their experiences are with the herb. Again, individual needs may vary. With initial use, it’s always an excellent idea to order a sample pack of kratom capsules, trying each strain one by one, in order to find the type of kratom that produces optimal results. From there, ordering should be a synch!

Congratulations on completing “Kratom 101!” We now invite you to select your strains. You can find the many varieties of kratom powder here. Need help? You can ask questions in the “Live Chat” portion of the website, where Top Extracts is there to help!

1 thought on “How to Start Using Kratom, a Guide to Choosing the Right Strain of Kratom”